With the COVID pandemic we are all very aware of the impact of infectious diseases. In dogs in the Northern Territory and Western Australia we are currently dealing with an epidemic (a sudden outbreak of disease in a particular area) called Ehrlichiosis. Most dog owners have heard of this disease now, but many are unclear on what it actually is and whether it is something that their dog is at risk of getting.

Ehrlichia canis is a bacterium that infects all species of dogs. It is transmitted by the Brown dog tick.

The Brown dog tick is very well adapted to surviving in urban homes. The tropical form of Brown dog tick that we have in the Northern Territory is particularly efficient at transmitting Ehrlichia.

In other parts of the world where the brown dog tick lives, Ehrlichia is endemic. It has been present for many years and dogs have a high level of immunity to it, so only sporadic cases of serious disease occur.

Prior to 2020 Australia was considered free of Ehrlichia. Unfortunately, it is now here, and here to stay. In Northern Australia have an ideal climate for the brown dog tick and have a well-established population of the brown dog tick (this is not a new type of tick). We have large numbers of ticks which are often poorly controlled, especially in remote communities. We also have a population of dogs that have never been exposed to this disease. This has led to rapid spread of severe disease in parts of the NT and northern WA. Hundreds of cases have been diagnosed, including cases in Darwin and Palmerston, but the number of actual cases is far higher with huge numbers of dogs in remote communities being affected.

A somewhat similar situation happened in Military Working Dogs in the Vietnam war when dogs from Australia that had never been exposed to Ehrlichia travelled to South East Asia where the disease was endemic. Many military dogs died from Ehrlichiosis.

What are the symptoms?

2-4 weeks after being bitten by an infected tick dogs may become acutely unwell with fever, lethargy, loss of appetite, and unusual bleeding or bruising being the most common symptoms. Stiffness, cloudy or red eyes, or enlarged lymph nodes may also occur.

During this phase of the disease dogs tend to have a reasonable response to treatment, and treatment may result in cure.

A more chronic form of disease can occur within months of being infected which can be much more severe, more difficult to treat, and has a high mortality rate.

How is it transmitted?

How is it diagnosed?

Blood tests are required to diagnose this disease. Your vet will likely run initial blood tests to assess your dog’s blood cells, and then send samples to a government lab for further testing/confirmation.

How can we protect our dogs?

Speak to your vet about which specific products are the most appropriate for your dog, we recommend a combination of 2 products: 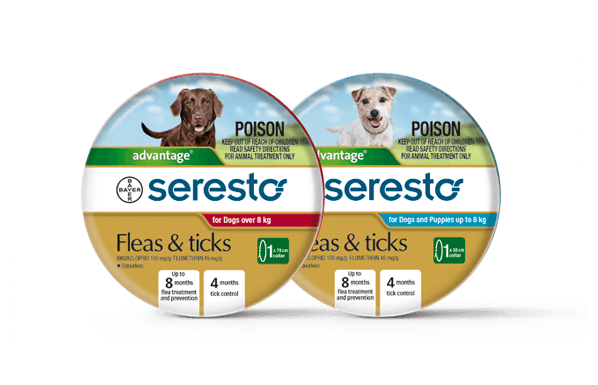 If ticks are present on your property, get a pest controller to treat the environment.

For more information on this disease please speak to your vet.